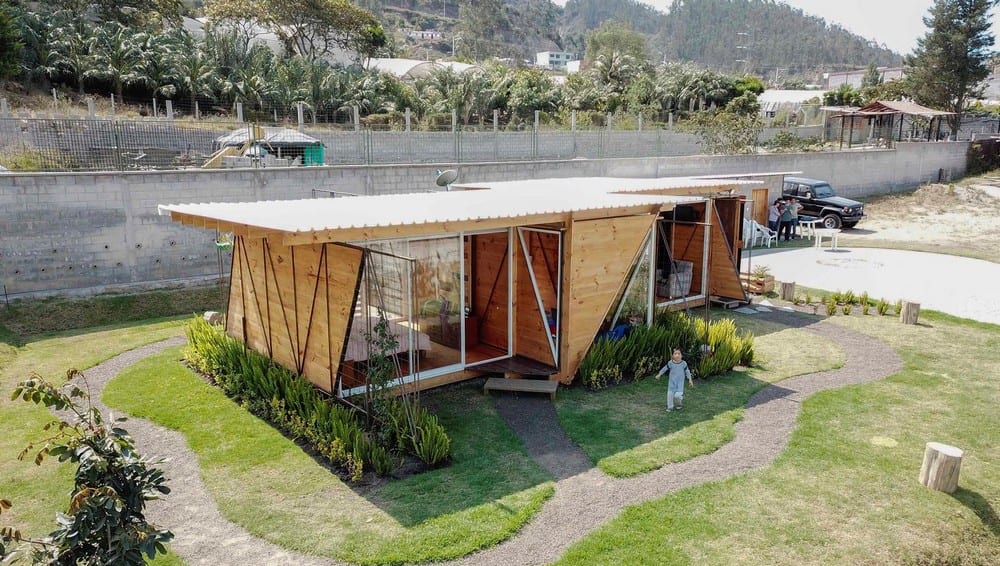 Orange Lemon House is a compact house built in a span of two month. The reason for the fast construction was because the owners wanted to move in quickly – to stop paying for rent and actually own a house. They realized that, instead of spending money for rent, they could use it to improve their own home.

However, prior to finally deciding on having the Orange Lemon House built, the owners were looking for container houses. Realizing that it would be too much work to reconstruct a container house into what they wanted, they decided to forego the idea.

A major consideration in the design of the house is cost. It has to be affordable so various cost-efficient strategies were employed in the design process. Pinewood was used in the most part of the house, giving it a relaxed, comfortable feel.

The living spaces were laid out in close connection with the outdoors. The rest of the areas were divided into sections and blocks to allow plants to grow. Furthermore, the design is flexible as it is able to accommodate the possibility of future extensions and additions.

Notes from the Architect

A home destined to become quickly a definitive home because the owners were looking for a house that would allow them to leave the rental department soon and thus stop paying endless fees. The challenge was to design the project in a month and to build the house of 65m2 in two months. A house which had to be an affordable one, for this purpose blunt design strategies were defined: to create a structural constructive system that requires little time of execution and covers a large area.

Initially, the owners looked for a house of containers, nevertheless they required ample spaces, also had to cover them and modify them the reason why the sense of its reuse was lost. For that reason, a system of corrugated rod trusses that allows containing spaces was defined concretely and virtually, besides the importance of structuring with our own measures for different uses.

The foundation was built quickly with the leftovers from the rods and they were made as piles. The modulation of the house is a function of the material (the trusses are 7.2 meters long), so it is distributed every 1.20 m x 2.40 m in height to receive industrial plates and reduce execution costs. However, in such a fast process we leave space for the spontaneous and the definition in the work in progress.

With all those involved, multiple meetings were held that generated a sense of belonging, and in a process of maturation of the project it was decided to use pieces of Radiata Pinewood for the secondary structure; and the closings of the house that are placed inside the structure, in order to gain a comfortable feeling in the interior spaces.

The habitable spaces are fragmented as volumes, to have better contact with the exteriors, to allow plant growth between the blocks and also deprive views by the different displacements. As a small house, possible future growth is planned. The diagonals of the trusses and the wooden diagonals that structure the house crosswise define the shapes of the house. The result is a cozy house that allows them to formulate new challenges.