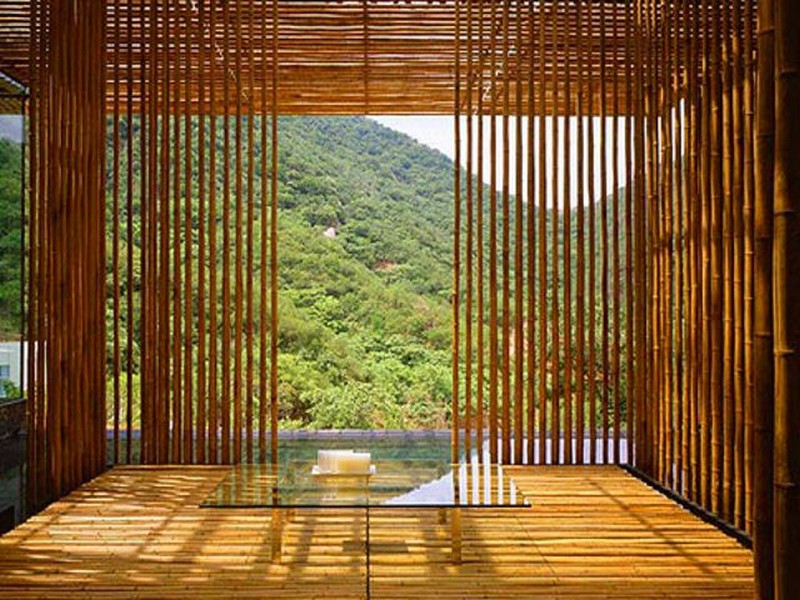 The Bamboo Wall House was completed in 2002 as part of a multi-dwelling project near Beijing. Requirements were to use local materials and conform to the topography. The architect chose to make maximum use of inexpensive bamboo – a traditional building material that has fallen out of favour in modern China.

Bamboo offers enormous strength and, as long as it is properly prepared, longevity similar to timber. However, bamboo is a grass and is harvested rather than ‘cut down’ the way a tree is. A single bamboo plant can produce many hundreds of culms over its life. As this home shows, bamboo is also a delight for the eye.

“Our first aim was to learn from the formality of the Great Wall. We were constantly attracted to the fact that the Great Wall has never been an isolated object. The formal quality of it running almost endlessly along the undulating ridgeline without being isolated from the surrounding environment was the nature we were attracted. That appealed to us as a criticism toward the conventional form of ‘architecture’ that tends to seek to be an isolated object among the environment. Thus our intention was to apply this nature of the Great Wall to the act of dwelling. This is what the house is titled ‘WALL’ for, instead of ‘HOUSE’

As for the material, we used bamboo as much as possible, since it’s considered as having a significant meaning among Chinese and Japanese cultures. Depending on density of bamboo and its each diameter, it offers a variety of partitioning of space. Making the most of that characteristics, we decided to place a bamboo WALL, a layer of bamboo along the site’s inclination just like the Great Wall. The Great Wall in the past partitioned off two cultures, but this BAMBOO WALL would not only partition but also unite life and culture in various manners as the Great Wall in particles.”

Click on any image to start lightbox display.  Use your Esc key to close the lightbox.  You can also view the images as a slideshow if you prefer  🙂

If you liked this, how about this bamboo passivehaus in France!

The Green School of Bali

From Prototype to Reality – Meet Your 3D Printed Home!