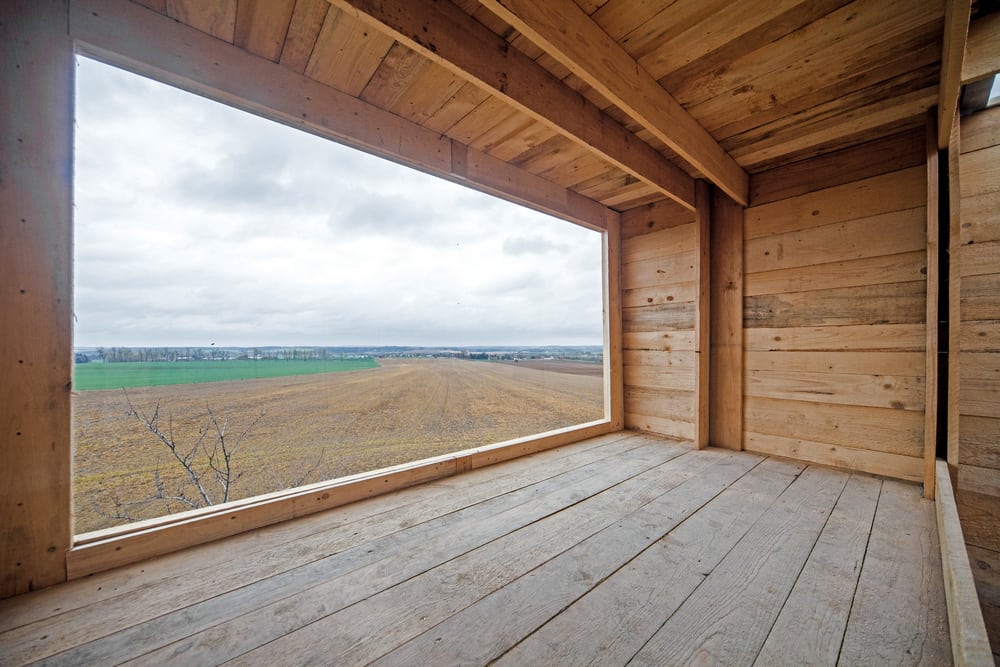 The Cabin is a rather unique shelter. It’s actually a timber refuge that sits on top of a concrete bunker. The bunker is a World War II relic – a defensive outpost of some sort. Today, it serves as a retreat that’s equipped with the basics. This is simple and fuss-free living at its best.

The structure occupies a very small area – 12.5 square meters, to be exact. The solid concrete bunker acts as a base; it anchors the timber structure to the ground. The light wooden building is actually removable and is composed of two floors. Two windows offer stunning views of the surrounding landscape.

The Shelter is an experimental wooden structure that was built on top of a former concrete bunker near to the borders of the Czech Republic and Austria. These small fortresses were built along the Czechoslovakian borders before the WWII. as a protection against Nazi Germany but they were never used. There are still thousands of these bunkers left in the Czech and Slovakian landscape.

The discussion what to do with these concrete bunkers that lack any function is still a sensitive topic in the society. That is why we designed it as a light wooden structure that can be easily removed and that minimize the impact on the construction of the bunker.

Because of the character of the landscape, we decided to design the shelter as a dominant vertical volume. The building has two large windows – one facing East – the borders with Austria and the second one providing a view to the church of the nearest village. In the interior, we wanted to show that even in a small built-up area (only 12 m2) you can create a generous space. During the construction process, we added another rooftop window.

The principle of the construction was to minimize the material, cost and the time needed for the construction. The building is very simple and can be built by manual labor using only common tools without any technology. The project is not financed via any donations or grants. The whole building process was done thanks to the helping of friends, family, and students of Architecture who were interested to participate on this project. Anyone can build a shelter like this. Because of the logistics of the building process the shelter was first constructed at a family farm and then disassembled and transported to the site 200 km away where it was again reassembled. The building serves as a shelter and after an agreement, anyone can stay there.

Do you like cabins? If so, you better take a look at Casa el Vigilante…