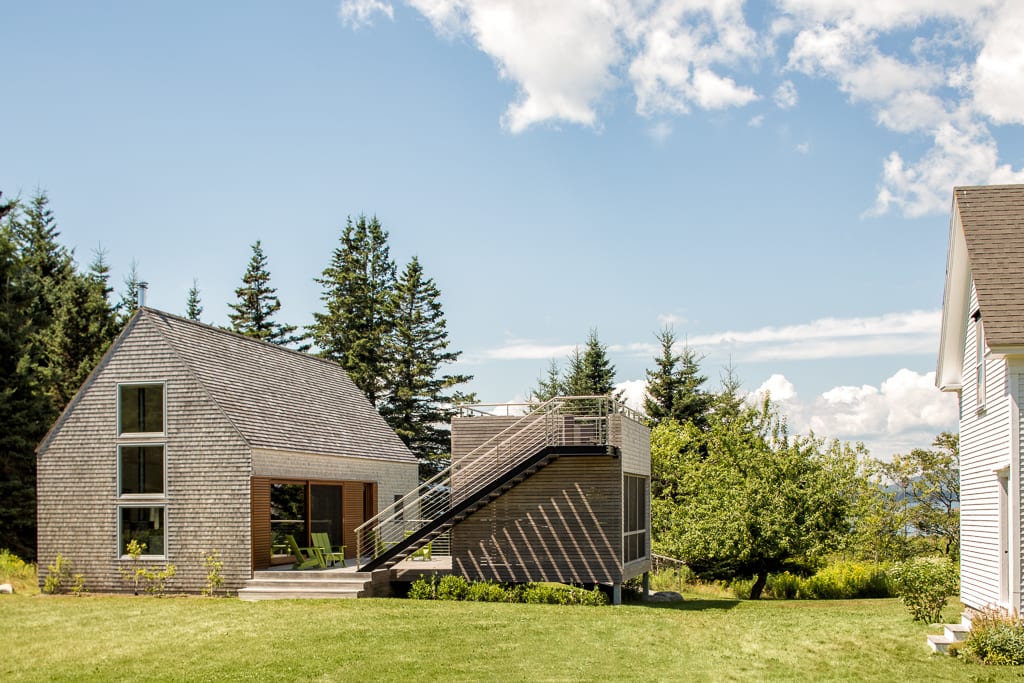 House on an Island is a two-structure summer house that’s connected together by a 12-foot deck. It was built as an addition to an existing century old farmhouse.

The main building houses the great room, a bedroom, and bathroom. The other structure has an observation deck and a screen porch. It’s accessible to the public is dubbed “The Box.”

The two structures stand among the lush green scenery, blending well into the beautiful landscape. The design reflects the modern version of a New England farmhouse. It’s charming and clean, reminiscent of past years but forward-looking.

Inside, the spaces are airy and bright featuring neutral tones of white and earthy colors. It’s a place meant for quality time – where summer memories are made more fun with the presence of family.

Located on a small island off the coast of Maine, this project began as a renovation.  Initially, our clients hoped that an existing building on their property could be rehabilitated: a structure that accompanied the 100 year old farmhouse that has been their summer home for close to 40 years. The small, hip-roofed, asphalt shingle-clad building had been uninhabited and neglected for decades, and was in a state of disrepair. A new structure would more easily meet their needs but needed to remain rooted in the traditional style of the region. Collectively we arrived at a concept that is a modern interpretation of New England farm vernacular and establishes a hierarchical relationship between the prominent white clapboard farmhouse and the less adorned, shingled outbuildings.

In order to accommodate multiple generations of the family, the main farmhouse would be given over completely to the young parents and children, and the new house would become the more private space for the matriarch. Between the two buildings a common area of outdoor lawn spaces and decks was created, along with a screened porch that could serve as both a gathering/dining area at times, while doubling as a privacy screen. The new house would be small and efficient, but comfortable enough for year round use, something that the old farmhouse, with its electric heat and poor insulation, lacks.

Siting balanced the creation of outdoor space with the embedment of the house within the rural island fabric of the neighborhood. Furthermore, an ancient public walking path to the shore runs through the middle of the yard. Used by the islanders for many years, it is an important part of local tradition, something that the owners were adamant be maintained. In the end the path provides separation between the main house and new cottage while acting as an organizing element for an already constrained site.

One enters the cottage off of a deck that unites the new house with a screened porch. A utility block containing entry, bath and kitchen elements subdivides the house into public and private spaces. The open living/kitchen space fronts the deck, opening onto it through a large sliding glass panel. The bedroom resides on the opposite end of the core. Quiet and meditative, it is content to gaze upon the spruce forest and ocean beyond, providing respite from the busy summer days.

If you liked this house, you also like Lake Cottage in Colombia.